Tilapia is a hardy fish that adapts to both freshwater and saltwater environments. According to researchers from the University of California Davis, tilapia has a salt-tolerant gene that makes it immune to salinity stress. Fish are delicate to salinity depending on their internal body chemistry. Salinity can be considered a stressor for most freshwater fish, but tilapia having developed physiological adaptations can resist and adapt to salinity. Changes in the water’s salinity will cause stress for fish depending on the species. However, tilapia is one of the fishes that could grow in either freshwater or saltwater.

Is Tilapia A Freshwater Or Saltwater Fish?

Traces of tilapia culture date back as far as ancient Egypt, therefore tilapia got the scientific name Oreochromis niloticus. Extensive cultured done by different regions have developed into their own species. Historically, as tilapia was first cultured in the Nile river, we can consider tilapia as a freshwater fish. Today, tilapia is commonly grown in natural freshwater environments like lakes and rivers in cages. Fish grown in lakes and rivers have access to natural feeds like algae and small fishes allowing for the tilapia to grow with fewer feeds.

Further research being done for tilapia include selective breeding to develop faster-growing tilapia, intensive recirculating aquaculture system, and controlling of the gender to avoid reproduction within pond and tank cultures.

Different species of tilapia have been observed to survive high salt concentrations of up to 120 ppm. Salt tolerance differs among species and the Mozambique tilapia has been observed to be the most salt-tolerant tilapia. This is also the most common variety of tilapia that is cultured commercially. Other species that are salt-tolerant include Oreochromis aureus and Tilapia zilli. The upper limit for salinity is higher for gradual changes as compared to shock changes. This means that tilapia are less tolerant to sudden changes rather than gradual changes in salt concentration.

Changes In Salinity Will Cause Stress For The Fish

Continuous increase in salinity of water caused necrosis on the liver and pancreatic cells of the tilapia. Furthermore, the fish exposed to rising salt concentration ended up with hemorrhaging cells. It is ideal to keep a consistent salinity for your system to not induce stress for your fish. Tilapia adapt to the water parameters at a young age so it is best to choose fingerlings that are suited to the aquaculture of your choice.

Should You Use Saltwater Or Freshwater To Grow Tilapia In Aquaponics?

Although growing tilapia in saltwater produces better-tasting fish, it is not advisable to use salt water for your aquaponics system. Aquaponics relies on growing both fish and plants in a recirculating system. Salts are naturally found in your water as ions of metals like calcium and other elements necessary for plant growth. Although in terms of salinity and saltwater, the element of concern is sodium. Having sodium in the system will damage plants and eventually make it impossible for plants to grow. So for the purpose of aquaponics, tilapia culture in saltwater is not a viable option.

Research shows a growth rate of Nile Tilapia to peak at 5.62ppm. This peak in growth rate is not significantly different from the growth rate at 0 ppm or at freshwater conditions. Different species of tilapia have different tolerance levels and optimal salinity for growth. Although growth rates are higher, the Feed Conversion Ratio is also higher. A higher FCR will mean it is more inefficient for the fish to grow in high salinity.

Salinity in water reduces the amount of bacteria and the growth of microbes. This results in cleaner produce and better-tasting tilapia. Although, this disrupts the growth of essential bacteria that assist in the nitrogen cycle. Using saltwater raises electric conductivity which in turn lowers the yield of your crops. Sodium causes osmotic stress and ionic toxicity for all vegetables unless they’re naturally grown in sea-like seaweed. 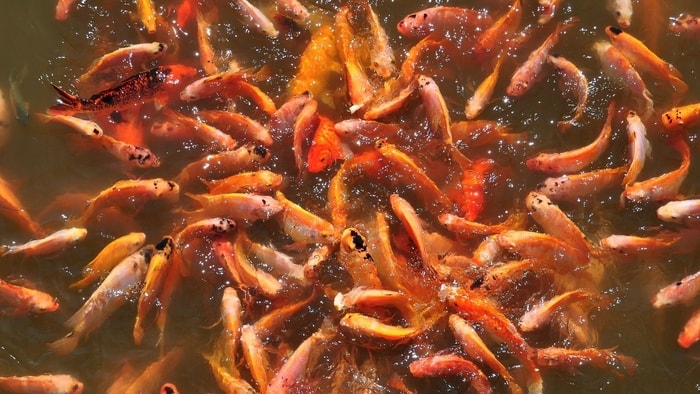 Read more about: What To Feed A Fish When Out Of Fish Food

Is Tilapia A Saltwater Fish?

Although there are records of saltwater aquaponics, crop yields in saltwater are generally lower. Aquaponics requires the operation of both hydroponics and aquaculture components in sync. Higher growth rates and better taste could be observed in saltwater aquaculture of tilapia, it will be better to focus on aquaculture instead since the water with sodium salts will not be useful for crops.

If you personally choose to operate aquaponics for the aquaculture component, it will be best to utilize the hydroponic component as a value-added product to lower FCR. There are many different ways to operate your aquaponics system, but using saltwater to grow tilapia in an aquaponics system is not advisable due to the damage it does to crops. The increased growth rate for tilapia and better taste for the market does not justify sacrificing crop yields.