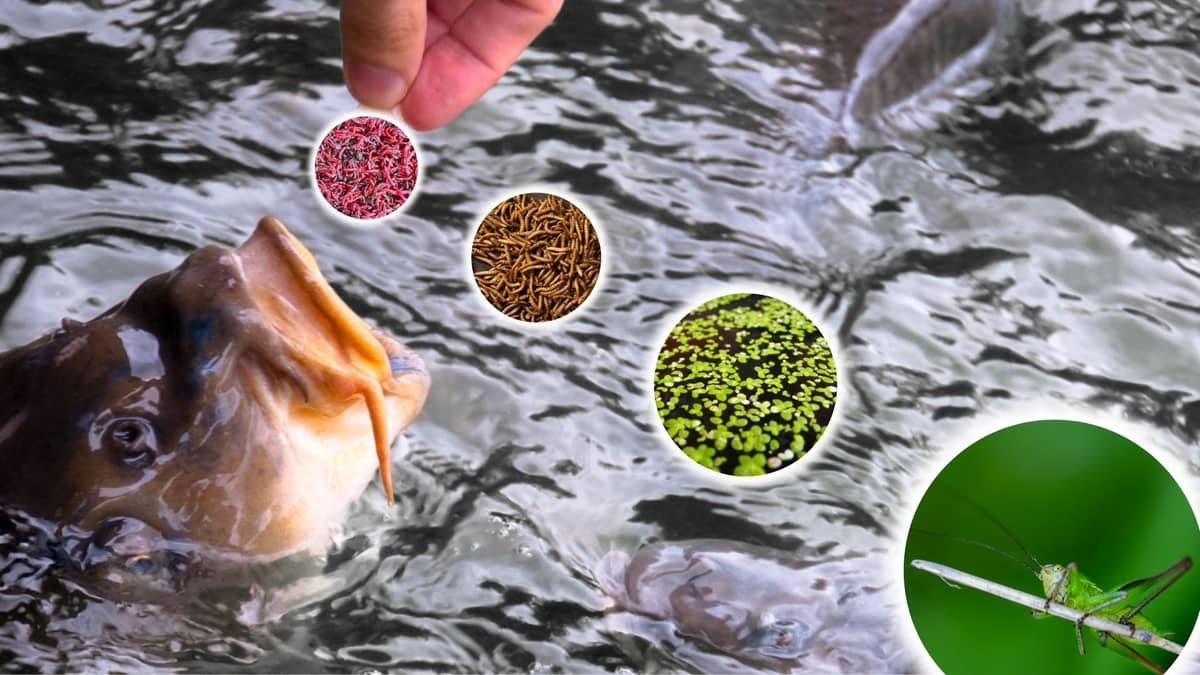 Deciding on what to feed a fish when out of fish food depends on what is readily available or easily prepared beforehand. What you can feed fish other than fish food is determined by the kind of fish. Substituting fish food with their natural diet is a possible alternative if fish food is not relatively available. Growing your own natural food cuts the cost of operation for your aquaculture tank as well. Today we will be discussing substitutes for fish food and how to make your own fish food.

You Can Make Your Own Fish Food For Carnivorous Fish Out Of Worms, Crickets, and Other Insects.

Insects offer a good amount of protein which is important for carnivorous fish. They can be grown alongside the system easily or caught by traps. Preparing your own vermicompost or insect trap will make them easily available as a backup food source or to cut down cost of fish food.

Companies like Koppert and agricultural supply stores sell pheromone traps for insects and pests. The traps effectively attract and trap insects on a fly paper, allowing you to get insects relatively easily. However, you can make your own insect trap as well. Different traps attract different kinds of insects so deciding what to feed your fish is the first step. Rotting organic matter attracts worms and maggots and provides a stable source of protein. They are the best alternative to provide the high protein requirement of carnivorous fish. Another alternative to traps is setting up a vermicompost. Using the rejected vegetables from your aquaponics allows for a cyclic economy for your setup as well.

How To Prepare Worms and Insects As Substitute For Fish Food

After catching worms and maggots in your trap, simply clean them with running water to remove debris. The water used to clean the worms and maggot can also be used to water your plants and soil. You can feed carnivorous fish with live worms, maggots, and insects or freeze them for storage. If the insects are frozen, thaw them before feeding them to the fish.

Some plants provide good protein content like algae, azola, and duckweed. These aquatic plants grow naturally and you could feed them to omnivorous or herbivorous fishes like Tilapia and Koi. Growing your own aquatic plants cuts down the cost of feeding and provides an emergency food source for your fish. These plants differ in protein and lipid content. Finding the right diet for your fish will require research and trials.

Duckweed and Azolla Grow On Top Of Water and Can Be Harvested Easily.

Duckweed and azolla are common aquatic plants rich in protein and used commonly for food alternatives for herbivorous fishes. These plants can be grown on shallow ponds and naturally fix nitrogen. Growing the duckweed and azolla directly in your aquaponics system adds to nutrient use and respiration, competing with the fish and vegetables. It is not advisable to grow them directly in the aquaponics system unless you are focusing on the aquaculture unit. It is also advisable to add air stones for proper aeration as nitrogen fixation and plant respiration require dissolved oxygen. To start growing azolla or duckweed for your own system, keep these in mind.

Different species of duckweed and azolla have different protein content as well, it is important to ensure the protein content meets the nitrogen requirement for your plant. Feeding the fish directly after harvesting the duckweed is possible as these naturally float on the water. It will be best to remove the remaining duckweed and azolla to ensure that they do not grow on the system and compete for nutrients.

Learn more about The Shocking Facts To The Question: What Do Fathead Minnows Eat?

Algae come in two major types; macroalgae and microalgae. Macroalgae include kelp and different types of seaweed. Common microalgae that are commonly available are spirulina and chlorella used for food and nutritional supplements. Extensive studies have been conducted on using macroalgae as a sustainable food source for fish as an alternative to fishmeal and soybean meal. Varying species of seaweed contain different protein content and nutrient profiles. In general, red and green seaweed provide better protein content than brown. As your aquaponics system runs on freshwater, prepare your seaweed before feeding to fish if not using freshwater seaweed. Here are two common species of freshwater seaweed that are available.

Essentially, you could grow your own algae following the same system for duckweed. These algae grow mostly underwater, so it will be essential to add rocks or soil in the bottom for them to grow. You could feed the freshwater seaweed directly to the fish after harvesting or after drying.

Macroalgae from oceans like those of the genus Ulva or sea lettuce are high in sodium content and will potentially damage the health of your plants in your aquaponics system.

Catfish and fishes from the genus pangasius eat anything, even each other. These are bottom feeders that will survive even without eating for prolonged periods of time. In developing countries, some aquaponics systems grow chickens in a large cage on top of a pond of catfish. The catfish eat both the manure and chicken feed that fall into the water. This water is then used to water fields of vegetables grown in soil. This is also another example of an application of the concept of aquaponics. With the growing demand for fish feed and aquaculture farms, we must learn to adapt a new and sustainable way of producing fish feed. With the increasing demand comes increased prices for commercial fish food. You could feed your fish with their natural diet when out of fish food, and add benefits to the quality of the fish being harvested. You could also cut operational expenses by growing your own food for the fish. Understanding the diet of the fish in nature allows us more alternatives when out of fish food.

Read more about: How Many Fish Can You Put In A 5 Gallon Tank